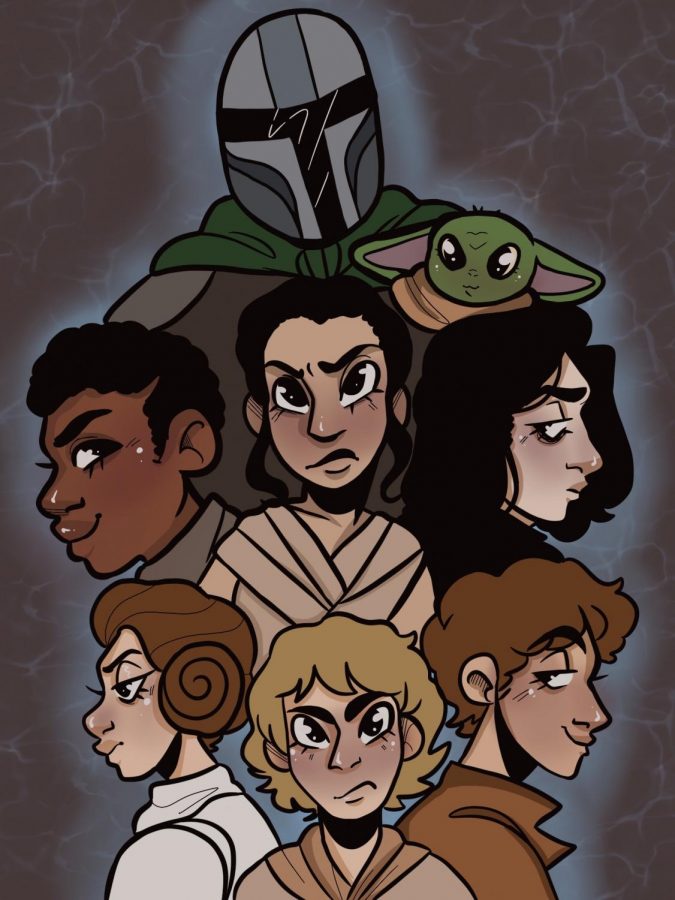 The Star Wars saga has defined the childhoods of three generations.

The next movie in the prequel trilogy was Attack of the Clones which takes place 10 years later. This film begins to show the progression of Anakin’s character (played by Hayden Christensen) into Darth Vader. One important plot point that really shows his reasoning behind his turn to the dark side is when his mother dies. When she died, he reacted by killing all of those who were a part of the tribe that killed her and he vowed that he would make it so no one else he loved would be harmed. It was also the film where the relationship between him and Padmé, played by Natalie Portman, grew and eventually led to them secretly getting married.

Revenge of the Sith, the final movie of the trilogy, shows Anakin’s fall to the dark side. He becomes overwhelmed with fear of losing Padmé and is willing to do anything to protect her. However, because he is so scared of losing the people he loves, he is easily manipulated by the Sith into turning to the dark side. At the end of the movie, Padmé dies while giving birth to Anakin’s children, who will grow up to be Luke and Leia Skywalker.

The original trilogy actually came out before the prequels, beginning with A New Hope. In this movie, we are introduced to Luke Skywalker, played by Mark Hamill. We are also introduced to the civil war between the Galactic Empire and the Rebels. Early in the movie, we are also introduced to Obi-Wan Kenobi who trained Anakin Skywalker before he turned to the dark side. However, Kenobi hides this fact from Luke and instead says that he fought alongside his father with the Jedi Knights and his father was murdered by Darth Vader. We are also introduced to Leia Skywalker or Princess Leia Organa of Alderaan played, by Carrie Fisher, as she is now known. She was captured by Darth Vader after stealing plans for the Death Star, which had the capabilities to destroy planets. I say it had the capability to destroy planets because it was destroyed by the Rebel fleet after Leia is rescued by Luke with the help of Han Solo (played by Harrison Ford) and Chewbacca (played by Peter Mayhew).

The next movie in the original trilogy and arguably the best, is The Empire Strikes Back. It was significantly more thought-provoking and took the series to heightened emotional levels. In this film, we see Luke Skywalker’s path to becoming a Jedi. He learns more about the Force and also begins to learn more about himself. It is this film where it is revealed to Luke that Darth Vader did not kill his father, he was his father.

The final movie of the trilogy, Return of the Jedi, at the time, was an end to a story. In this film, Luke’s journey supposedly comes to an end as he becomes a full-fledged Jedi. He also learns that Leia is his twin sister and he decides to tell her that they are siblings and that their father is Darth Vader. Luke decides to confront Vader and allows himself to be captured by Imperial troops. However, Emperor Palpatine, also known as Darth Sidious has been pulling the strings all along. Palpatine fights with Luke and unwilling to let his son die, Vader prevents Palpatine from killing Luke by throwing the Emperor down a reactor shaft. As Vader redeems himself, Luke removes his mask and Anakin Skywalker dies in his son’s arms. This brought Anakin’s story full circle as he died a hero. However, it was not the end of the story.

In 2012, it was announced that the Skywalker saga would continue after Disney acquired Lucasfilm. In December 2015, The Force Awakens was released. It introduced us to some new characters such as Rey (played by Daisy Ridley), Poe Dameron, a Resistance pilot, (played by Oscar Isaac) and Finn, a former stormtrooper (played by John Boyega). We were also introduced to our new villain, Kylo Ren (played by Adam Driver). However, it also brought back old characters such as Han Solo, Princess Leia, who is now a general in the Resistance, Chewbacca and eventually Luke Skywalker. This film, like The Empire Strikes Back has a lot of unpredictable twists and there were a lot of mixed feelings when it came to some of those twists. For example, late in the movie, it is revealed that Kylo Ren, is the son of General Leia and Han Solo. Unfortunately, this later leads to a confrontation between Han Solo and Kylo Ren, also known as Ben Solo and he kills his father. The movie ends similarly to A New Hope in which they destroy Starkiller Base which was basically the Death Star on steroids. And at the very end, we are reintroduced to Luke Skywalker.

The sequel trilogy continued with the release of The Last Jedi in December 2017. The Last Jedi drew a lot of criticism from fans, including myself, at least when it came out. As I rewatched it, I realized that the movie wasn’t entirely bad. The movie focuses a lot on Luke’s training of Rey and the relationship between Rey and Kylo Ren. In this movie, we see a very different side of Luke than we did in the originals, he is very pessimistic and easily frustrated. However, this movie allowed for a lot of character development where Kylo Ren was concerned. In the first movie of the trilogy, he is very much a villain, he wants power and he will not allow anything to get in the way of that. But in this movie, a force bond is formed between him and Rey and this connection leads to him helping her kill Supreme Leader Snoke. However, this movie had a very unnecessary subplot with Finn and a new character, Rose, played by Kelly Marie Tran. Rose was a good character, but it seemed like the only reason she was introduced was to give Finn a love interest.

Last month, the Star Wars saga ended with The Rise of Skywalker. This film brought Kylo Ren’s character full circle and parallels Loki’s character development in the Marvel Cinematic Universe. This movie also brought an end to the Skywalker saga. It also attempts to solve some of the problems of The Last Jedi.

Now, although the Skywalker saga has ended, new stories in the Star Wars universe have been pursued. For example, Disney+ has released The Mandalorian which is a TV show that follows a bounty hunter in the time between Return of the Jedi and The Force Awakens. This show has gained a cult following, mainly due to one of the characters which many have dubbed as “Baby Yoda.” Technically, the character is referred to as “The Child” but try convincing the fans of that. There have also been spin-offs that have either given origin stories to beloved characters like Solo: A Star Wars Story or stories behind major events in the films that were briefly explained, like Rogue One.

Even though the Skywalker saga has ended, the story will never truly be over. There will always be more stories to be told, and I believe that Star Wars will continue to impact even more generations to come.