While the school musical is always an exciting event at Puyallup High School, according to the cast, there are still some hassles along the way to showtime, especially with the mask mandate.

When it comes to clubs and other school activities, this makes you ponder how the changes will affect students’ after-school interests, and this year’s fall musical “Seussical” is no exception to these changes.

“Seussical” is a play written by Lynn Ahrens, centered around the many children’s stories of Dr. Seuss, with most of its plot discussed through familiar tales such as “Horton Hears a Who!” and “Horton Hatches the Egg!” while incorporating characters like “The Grinch” and “Cat in the Hat.” It made its first debut on Broadway in 2000 and despite being panned by critics it has survived as a favorite musical for many.

Senior Danielle Poulin, who can be found portraying Sour Kangaroo, confirms the predicted difficulty to this prep for showtime.

“It’s a little funky…singing is a little weird,” said Poulin

Tylor also mentions a concerning problem that is often neglected by mask wearing, such as breathing difficulties. According to her, being masked and doing the production increases this dilemma. However, her outlook remains positive.

“…especially if you have breathing problems, other than that it’s pretty good,” Tylor said.

So far, it appears as neither Poulin nor Tylor notices the difference until brought up on stage to perform. In the world of theatre, speaking loudly and clearly is key to a good performance. With masks, this decreases the knowledge of what cast members are saying immensely. Poulin states her own advice that she likes to follow when performing.

Tylor included an optimistic approach on the situation:

“When people are singing it’s easy to hear everybody,” Tylor said. “It’s going to be an awesome production.”

“Seussical” director PJ Sirl listed several cons to this mandate, as well as some of his concerns come opening night.

“You know, they’re [the masks] obviously hotter than you want them to be; it’s difficult to hear [the students] at times and I am concerned with how the mics are going to interact with the masks,” Sirl said.

Microphones are a must to help with projecting on stage for a large audience, and according to Sirl, it’s unlikely they will have the opportunity to attach microphones to the students as they have done in previous years. Even so, Sirl has a few ideas in mind that he is considering testing out.

“Usually, we run the mic down the ear and tape them. They’re real sensitive, and I don’t know what it’s going to sound like yet,” Sirl said. “Depending on the character we run the mic up by the forehead and through the hair and I think we can do that with this.”

“We’re still thinking we have to do [the play] with masks on, so it may be a little funky with microphones,” Poulin said.

Sirl explained the differences in the audition process as well, although there aren’t as many as one might think. The audition process was surprisingly typical other than the fact that everybody was masked. The only time masks were removed were for the singing portion of try-outs.

“We split it into three days (singing, dancing, and acting), and we put out a callback list of people we needed to see more of and we made a decision,” Sirl said.

Sirl isn’t alone in taking on this production of “Seussical,” Jason Brinker, the choir teacher and Todd Giltner, the orchestra conductor, work alongside him with music, as well as some students helping choreograph the dance numbers. While introducing the rest of the crew members, Sirl acknowledges some final thoughts on how this show may take place.

“We say this over and over again that this year is different. But some things are the same,” Sirl said.

Sirl isn’t only directing the play, but he is also assisting with a major necessity in order to tell a proper story.

“Mostly what I do is work on scheduling and I build the set. So, I come in on the weekends and do that,” Sirl said.

Overall, the actors’ point of view remains thrilled about the show’s entirety, and that the masks have become only a small hurdle when looking at the grand scheme of things. The cast had several pieces of information that they wanted the audience to know before viewing the show.

“It’s sweet, it’s nice, the theme is a person’s a person no matter how small. It’s about family and how family can come in all sorts of flavors,” Sirl said.

Sirl said he is thrilled to have his production of “Seussical” go up come later this fall and reflects fondly on past students that have taken part in theatre at Puyallup High School.

“I’ve had seniors that come up to me and say, ‘I should have been doing this a long time ago,’” Sirl said. 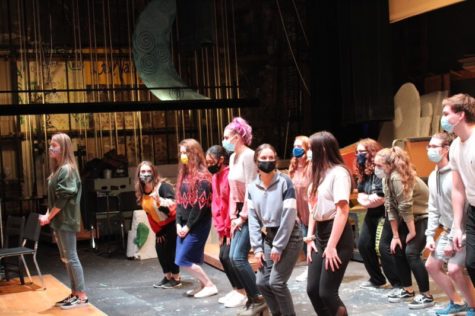