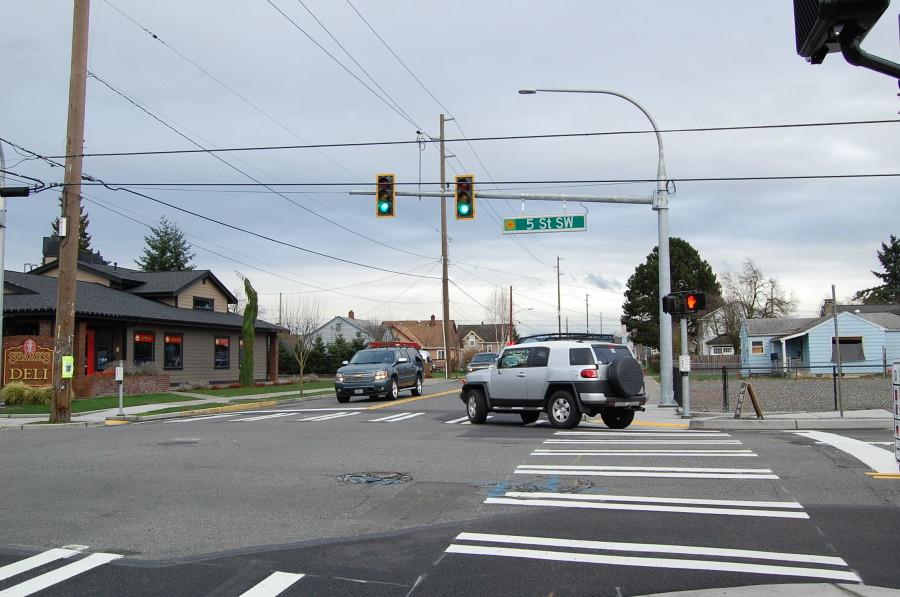 The new spotlight at the intersection of Fifth Street and Seventh Avenue was placed to reduce traffic and promote pedestrian and driver safety.

In attempts to create a safer driving environment for the community of Puyallup, the City of Puyallup has introduced a new street light at the intersection of Fifth Street and Seventh Avenue accompanied by pedestrian crossing signals. This installation is a part of the six-year transportation plan.

Traffic Engineer Sanjeev Tandle stated that the necessity of the light was based on the number of traffic collisions occurring each year at the sight of the new light.

“There are more than five major collisions every year at that intersection so whenever we have those situations we try to improve. The four-way stop was in place for a while. [It] was not adequate so we have to move to the next mediation which would be a traffic signal,” Tandle said.

The extent of vehicles and foot traffic through the intersection has been a problem for years. Tandle stated that the volumes around Fifth Street can cause queues that backup all the way to Pioneer at peak hours of the day. Even after implementing a left turn lane several years ago, the numbers continued to be an issue.

Regular commuters of the Sound Transit Park-and-Ride, like Deanna Briggs, hope the new traffic signal will alleviate the backups caused by the previous four-way stop.

“[The traffic signal] was long overdue. When there are events at Sparks the traffic flow is bad with the four-way stop. I think this will help move traffic at a better pace during events,” Briggs said. “We have to catch the ‘S’ bus from the [Sounder] station back to the [parking] lot. Having the signal helps us get to the lot faster when the traffic is heavy from events. It is not fun standing in a crowded bus when it is stop and go through a four-way signal, especially at the end of a long day.”

Briggs also expands on the newfound safety of pedestrians as well as drivers.

“When it is dark you cannot always see the pedestrians. From my experience walking, I did not trust the drivers with the four-way stop. They seem to pay more attention to the order of who goes next over looking for pedestrians during busy times,” Briggs said. “I think the light is safer for both drivers and pedestrians as long as they follow the signals. I have not walked the route since the signal has been finished but will occasionally during warmer months and when there is [more] daylight.”

Tandle stated that the main goal of the installation is to increase the safety of driver and pedestrians alike.

“Safety is number one for me and for the city. I am hoping that we reduce the number of collisions at the intersection. During the fair, there are tons of pedestrians [and] we added street lighting at that intersection and also along Seventh Avenue from Seventh Street almost all the way to meridian. That should help improve pedestrian safety,” Tandle said.

However, not all minds think alike. Sparks Firehouse Deli employee Kyle Lawson stated that although it may be too early to tell, he does not see much improvement since the new traffic signal has been installed. But Lawson has found that this could bring about better awareness for the business.

“It is kind of nice how it backs up and people actually stop and can see the business instead of having to worry about [moving forward],” Lawson said.