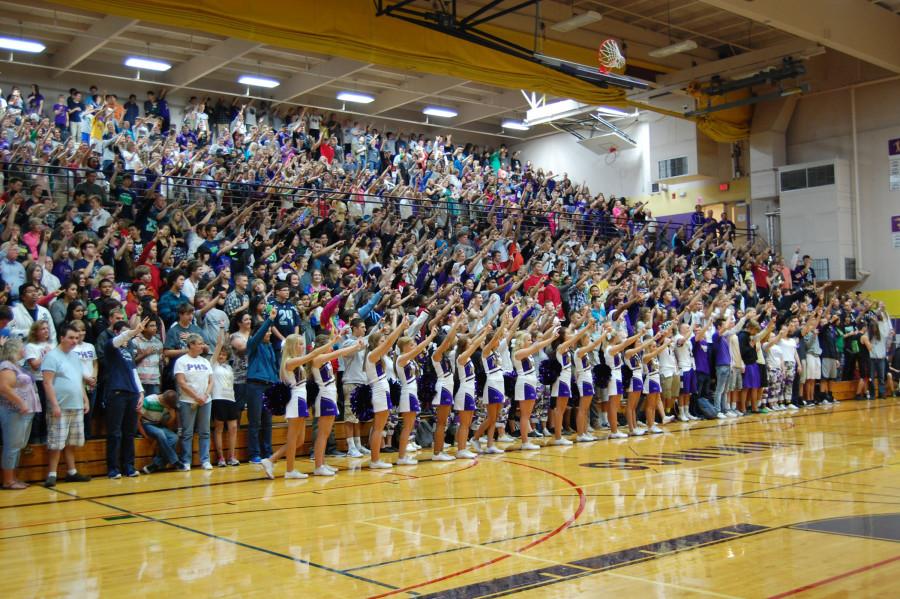 Students display a symbol of school spirit through the Viking horns at the end of "The Star-Spangled Banner" during the Sept. 19 assembly.

Within each high school there are certain traditions that have been around for as long as anyone can remember. These traditions are what make each high school into its own unique community.
At PHS, the unique traditions are the spontaneous salute of the Viking horns at the end of the national anthem and the time-old Puyallup fight song.
However, social studies teacher Anthony Batinovich explains that the tradition of putting up the Viking horns after the national anthem does not have a known origin.
“A few years ago when we played Bethel at the end of ‘The Star-Spangled Banner’ they would always try to put their own spin on it and then soon afterwards a few of our kids started doing the Viking horns at the end of the deal,” Batinovich said. “I do not know who started it or why it started but it did. We just kind of followed the groups before us. I guess it goes in three-year cycles, maybe if somebody changes it pretty soon no one will do it.”
Sophomore Serena Landon confirms this idea of following the groups before us.
“I find [the Viking horns] perfectly normal. As a sophomore I thought it was a tradition so I just followed along. It is our own way of showing school pride,” Landon said.
Furthermore, chemistry teacher Angie Reed comments that the tradition has been around for more than nine years.
“I have been here for nine years and we have been doing [the Viking horns] since before then. I think it is awesome. I think it shows our unity and I think that that is a part of the national anthem. We sing it as a country and we do the Viking horns as the Viking family,” Reed said.
However, Batinovich, who is also the girls volleyball coach, says that the Viking horns detract from the significance of the national anthem.
“I am not a fan. The first time one of our teams did it I asked our girls not to do it again at a volleyball match. I think the song is what the song is, it may not be the world’s greatest but I think it is a testament to the men and women that have been in the military or are in the military and have sacrificed for the country. I think it should end like it was meant to be ended,” Batinovich said.
In contrast, principal Eric Fredericks says the Viking horns speak to the unity of the student body.
“I think national anthems and pledges of allegiance to a country are all signs of solidarity and unification toward a common appreciation of our country. I think the Viking horns at the end of the national anthem further personify the connectedness of our students and our school culture,” Fredericks said. “I think it is part of that whole notion of unification and common belonging. I think it is an important part of what we do [and], honestly, I do not think it detracts at all from the national anthem.”
Another tradition of PHS is the Puyallup fight song.
In the past, the fight song was sung along with the band as a way to gather school spirit. But now it is seen as the queue to leave the assembly.
“[The fight song] used to be up on the wall in the gym but when they remodeled the gym it did not go back up. It is in our planners on the back page [but] I am sure that people just are not aware of it and as long as most people think it is a queue to leave the assembly, then they are probably not going to pay attention to the words,” Batinovich said.
Reed believes the change is a result of the fight song losing significance in the eyes of the student body.
“I think [the change] has to do with age. When I was in high school, we all knew the fight song really well. We knew our fight song, we sang our fight song, we clapped along to it and I think that the fight song has for some reason lost the importance,” Reed said.
Reed additionally says the meaning of the fight song just does not connect to current students like it does to alumni.
“Maybe it is that current students do not see the connection to it. Like there is a point where it says ‘Rah, rah, rah’ who says that anymore? And ‘On Puyallup…’ what does that exactly mean? Maybe it needs to be rewritten in modern times but I do not know if that takes away from the longevity of Puyallup,” Reed said.
Likewise, Batinovich comments that the fight song could be viewed as sexist.
“[The fight song] is very traditional but it is about one sport and a guy’s sport and I would abstain for my own personal reasons from singing it because it is kind of sexist and maybe a tradition we can change,” Batinovich said.
Fredericks expresses his wish for an increase in students connecting to school culture.
“PHS, like a lot of schools, does not have a process for inducting incoming students and I think part of that induction of students is learning those aspects of our culture, like the fight song. I think there are assumptions made that we just learn these things as we go,” Fredericks said. “I think something we can look in to down the road is how do we induct sophomores into the Puyallup culture. I think being able to sing the lyrics speaks to a connectedness to school culture and I would like to see more students connected to that school culture.”