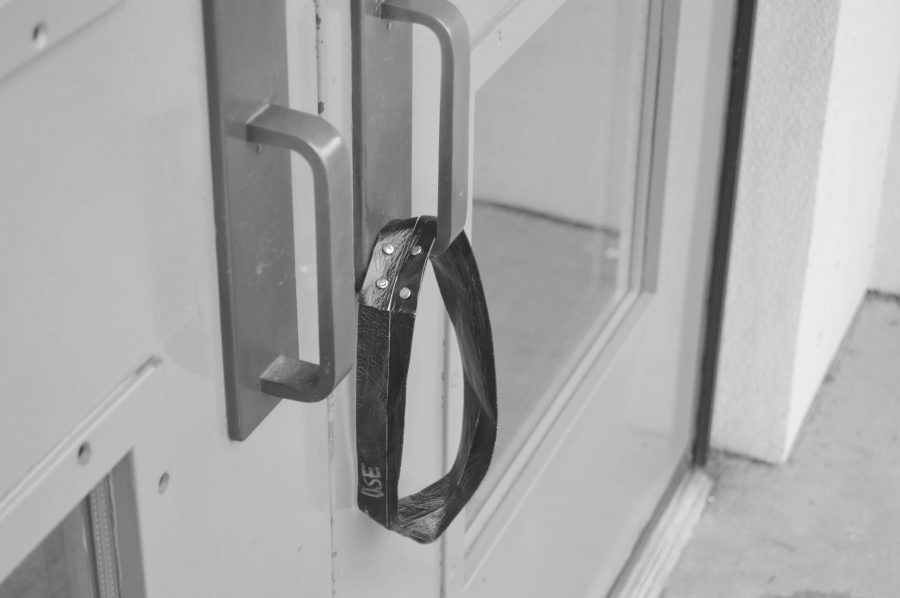 The main building door closest to the gym (and others like it) has been fitted with a band to aid those who normally have trouble opening the door. This band has been labeled with a statement "Do Not Remove This Strap" as a way to deter the loss of the strap.

Black bands have recently appeared on the north entrance doors of the main building.

Para-educator Peggy Haskey explains the reason the bands are on the door.

“[The bands] are to assist a student that is not able to use the handles that are on the doors. It is a low-tech way to make the entry doors more accessible,” Haskey said.

Senior April Johnston, who uses the bands, clarifies who the bands are intended for.

“[The bands] are used for people [that are] in a wheelchair that [have] a hard time opening the door. You just grab the band and open [the door] themselves,” Johnston said.

The freedom and independence of the bands appearing on the doors was crucial for the students that use them. Johnston states that she has to leave early from each class to go to her next class, so other students or staff members would not be around to assist her with the door.

“In April’s case specifically, because she does not have fingers and her hands to grab [the door handles], she was not able to open those doors. They are really quite heavy. In putting the bands on [the doors], she can just grab it with her leg and pull [the door] open easily, quickly and independently,” Garza said.

The bands work well, according to Johnston, when they are on the door.

“Lately [I] have not used [the bands] because [they keep going] missing,” Johnston said.

Garza states that the bands have been implemented since the end of September but with the bands disappearing frequently, they have been more of a hassle than helpful.

“It has been an issue with the bands staying on the doors. It started with belts, which got removed. Then I switched to bands with Velcro and then they were getting removed. Most recently I put them on with rivets. One went missing so I had to put one of the old ones on that was Velcro. It has been a bit of a struggle to keep them on the doors. I have done different things like I added a sign and [the bands] are labeled,” Garza said. “On my standpoint it has been a little bit frustrating. [The bands] have gone missing even with the sign. We really wanted to get [the bands on the doors] because April has courses in the portables second semester. It has not have been as big of an issue this semester because most of [April’s] classes have been in the building.”

Haskey believes that the bands keep on vanishing because no one knows what they are meant for.

“I think they fell off easily. People did not realize that they were there for a purpose. I do not think people would purposely want to take something away so somebody could not get in the building.” Haskey said.

Garza states that PHS, while in compliance with the American Disability Act, still has its struggles when it comes to the state of the school’s accessibility for students.

“The building meets ADA requirements as it is but it is still a challenge for some students. That is why we had to add the modification to the doors. I would imagine because it is such an old building, they have different grandfather clauses for historical buildings,” Garza said. “Another issue with this old high school is not every door is accessible so we put [the bands] on the two most-accessible doors closest to where April needs to use them.”

Garza and Johnston urge students to encourage others to keep the bands connected to the door.

“Leave them there. Do not mess with [them], people that are in a wheelchair need to open the door,” Johnston said.