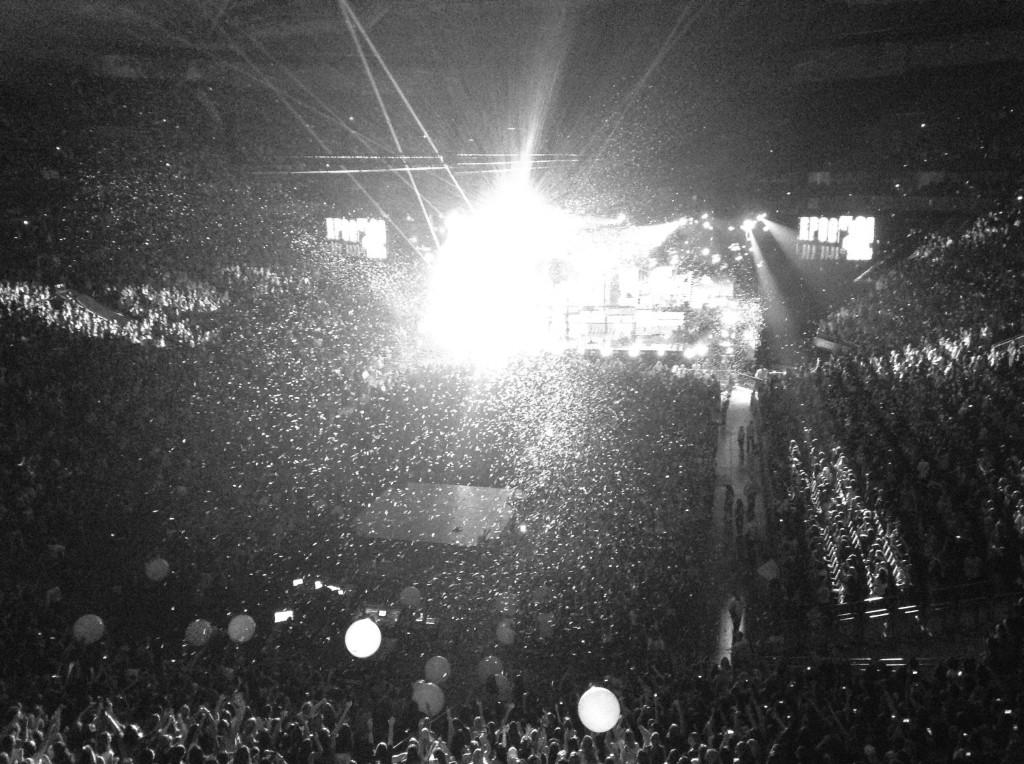 The sight of flashing lights.

The feeling of excitement.

The sound of thousands of screaming people.

Since tickets for this concert went on sale a year before, the anticipating crowd members had been waiting to see the British boy band of five called One Direction. Now, July 28 at the Key Arena the crowd members were getting their first glimpse of the five members: Harry Styles, Liam Payne, Niall Horan, Louis Tomlinson and Zayn Malik.

The bands’ entrance hadn’t been fantastic or exciting. They literally walked onto the stage and began to sing. Not what you would expect from a band that has so many fans.

Once One Direction’s first song came to a close, the members began talking to the audience. People were going insane, screaming things like “I love you!” and “Marry me [insert band member here]!” The girl next to me was holding her hands over her heart and shrieking “Oh my gosh! Oh my gosh! Oh my gosh!”

I scooted away from her and tried to avoid eye contact, scared that she was one of those crazy die-hard fans that call themselves “Directioners.” If she was and she learned my secret, I would be toast.

My secret was that I had no clue what the big deal was about One Direction.

Although I liked a few of their songs, I never was the girl that had a crush on one of the members or thought that one day I would marry them. I viewed the people who thought they were in love with these boys as ridiculous. The ones who believed that they were the band’s biggest fan were pitiful in my eyes and the ones that melted to butter at the sight of the boys were irrational.

I had only known I was going to the concert for three days after my friend offered me her extra ticket. I had happily said yes because I knew that it would be an amazing experience, one I would never forget.

Not only did I not understand the fuss over them, I was very uneducated in the world of One Direction. I had learned that there were not four band members like I thought but five. Not one of them had the name John. And looking at the set list, I knew only two of the songs really well.

I was definitely not a die-hard fan of One Direction.

As the next song started, the combination of the loud music and screams became too much for me. I tried to shove a pair of earplugs into my ears but sadly they were ineffective against the deafening noises.

Although I couldn’t really sing along to the music, I was entertained by the sight of the singers goofing off on stage. Two of them were having a fake fist fight and the others were dancing. At one point during a slow song, the blonde one started to laugh for no apparent reason.

On a second stage they answered questions that audience members had submitted on twitter. The questions were funny, like “Which one of you is going to be married first?” or “If you were in the ‘Hunger Games,’ which one of you would die first and how?” The witty boys appeared to have great fun answering these questions.

At one point a few of the crowd members flung themselves onto the stage and crawled over each other to reach the five boys. The whole situation was crazy to watch.

The finale of the concert was incredible. The band sang “What Makes You Beautiful” and there was red and white confetti raining down from the ceiling. Crowd members on the floor were tossing around large colored balloons, many of which got taken home by happy fans at the end of the night.

Just as I thought, it was a night that I will never forget. Even though I am not the biggest One Direction fan, I had a great time at the concert. The crazy fans, the blaring music, the flashing lights and feelings of excitement were all things that helped create a memory that will stick with me forever.