Senior Nathaniel Holcomb entered the record books alongside names like Brian Lindgren and Jordan Kitna when he threw for 451 yards, setting a new 11-man state record at the Sept. 23 game against SK. 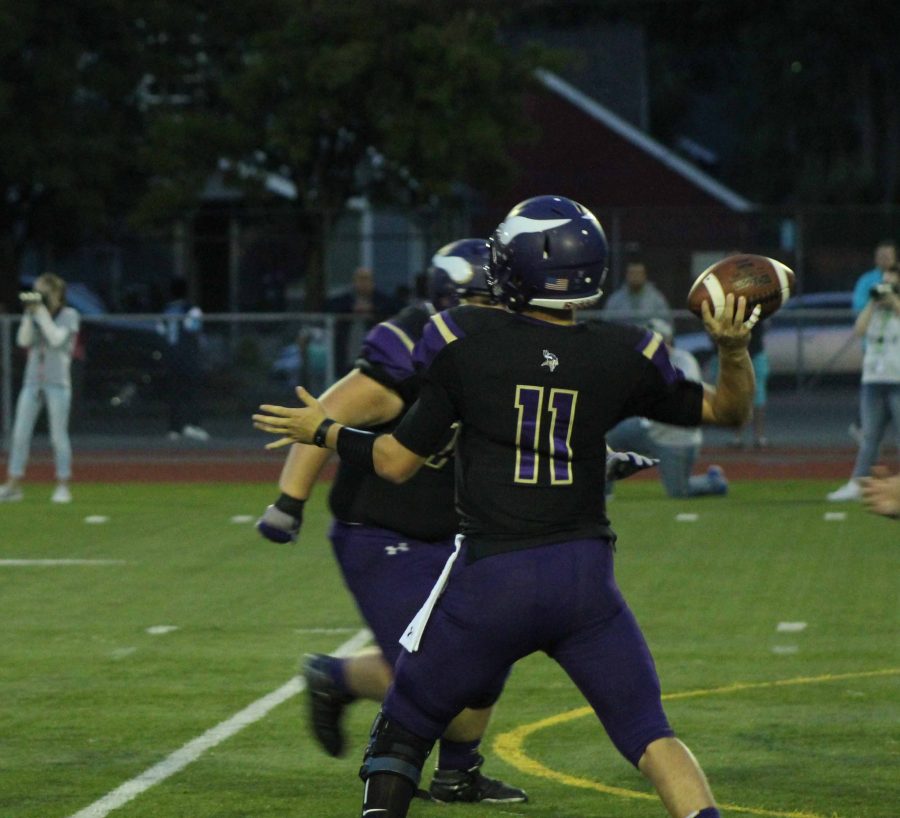 Holcomb throwing during PHS' 49-7 victory over rivals the Rogers Rams.

In the game against South Kitsap High School senior quarterback Nathaniel Holcomb set a State record this past Friday, Sept. 23, for the most touchdown passes in a single game, with 10 touchdowns.

Holcomb wanted to thank his offensive line is to thank for standing tall this season.

“I hope you really spotlight the offensive line, they do not get enough attention on social media, or really any media actually for just how important they are for our offense. Pass blocking wise, I have only been sacked three times this year, I cannot throw any touchdowns without them. I want to shout out to the five lineman in front of me each play and the couple who sub in,” Holcomb said.

Holcomb sees his record as something that needed to be done to win the game.

“It is kind of cool that I hold the record, my name is at the top of the list but it does not mean a lot to me,” Holcomb said. “It was a very high scoring game for both teams, all we did was do what we needed to do to win the game that was in front of us and that was to score points, which turned out to be passing touchdowns. The receivers made great play on the ball and the offensive line did a great job giving me time to throw. The record is cool to have but I just care that we got the win.”

The touchdown pass record was not the only record broken during the game.

“We were on the way back, music was blasting because we had won the game and coach Broussard told everyone to turn off the music because he had two announcements to make,” Holcomb said. “The first was that we broke the SPSL record for most points scored in a single game, the other was that I broke the State touchdown record that was the first time I heard it. It was really cool because all my teammates were really happy for me. We turned the music back up and everyone was dancing, it was a very fun ride.”

“It is going to be a really tough win. All year we are just going to attack fear, that’s our motto, ‘Attack Fear.’ That is what our whole team goes by and that is how we are going to win this game. We consider ourselves the underdog, which we like because all the pressure is on them, we are going to come out firing, right away, no hesitation and do our thing,” Holcomb said.