Susees Reflect on Time in Dubai 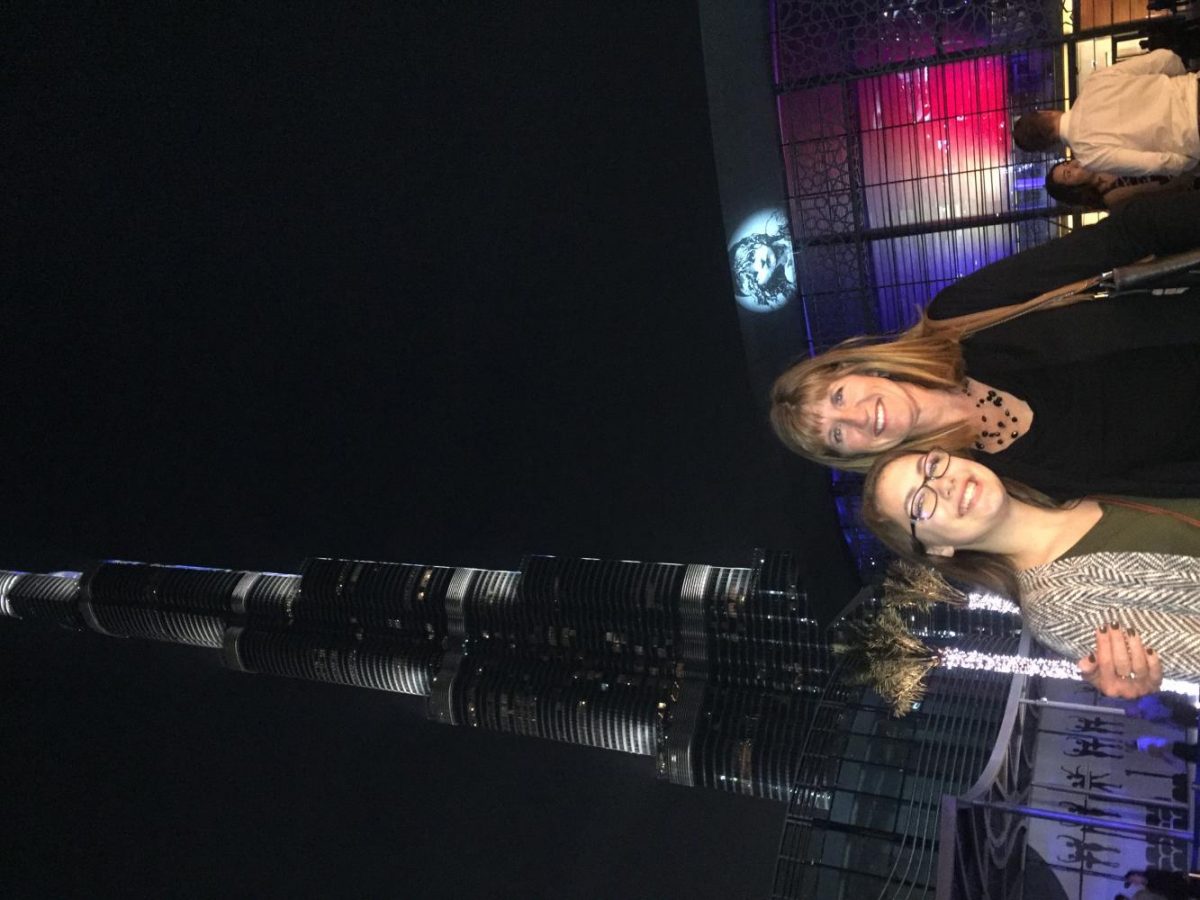 Even worse, you are asked to describe yourself in five sentences.

And the rest of the class has been speaking the language since fourth grade.

This was junior Amber Susee’s experience on her first day as a freshman. After attending and interviewing at a job fair in Boston, her parents (both teachers in  the Puyallup School District) were offered international teaching jobs. They decided to take on the adventure by living and teaching in Dubai for two years.

“Growing up, teaching and living in Puyallup all my life, I really wanted a change,” Kris Susee said, explaining why they were interested in teaching abroad. Kris Susee is now teaching social studies at Aylen, although she taught at Edgemont for 16 years before leaving the states.

When the Susee family arrived, the first thing they noticed is how warm it was.

“The first night we arrived, I remember how hot it still was late in the evening. The trip from the airport to our apartment, I remember being in awe at all the amazing buildings, including our first sighting of the Burj Khalifa, the tallest building in the world,” Kris Susee said. “The funny memory now was waking up the next morning wondering ‘What had we done?’ After shedding a few tears with my daughter, we rallied and got the very dirty apartment cleaned and started unpacking. Setting up our ‘home’ became the focus of the first few days.”

While the change was shocking at first, the family adjusted quickly and by the time the two years ended, Amber Susee was sad to leave. Their trip was filled with many fonds memories, Kris Susee says.

“I will always cherish all the new experiences exploring Dubai as well as the many travel opportunities we had. We loved it when family came to visit and we could play tour guides and show off what a great place Dubai is to work and play,” Amber Susee said.

Amber Susee also recalled the fun times she had in Dubai. She got to play Maria in her school’s production of The Sound of Music, was a member of theater club and the volleyball team and played in the band.

The structure of education in Dubai is not far off from what we know in America. Although, some aspects of their specific school were different than PHS.

“Teaching and learning was really the same. Focusing on standards and helping the kids reach those was really the same formula there too. I would say, because the school had a bring-your-own-device policy, the students there are farther in terms of technology. These international students mostly look to go the states for their university experience. I was pleased to see that what we are doing here in Puyallup makes our students competitive for those university spots,” Kris Susee said

The Susee’s school in Dubai differed from PHS because it was on block schedule and used an IB curriculum, which is much more rigorous than AP classes, Amber Susee says.

“In a typical day, I would get up and get ready, then leave right before school started because it was a two-minute walk to school. We had homeroom then went to classes, we were on an eight day block schedule. Then I would go home and do homework. In the afternoon, we could go to the mall down the street,” Amber Susee said.

They could also go lay by the pool after work during the cooler months, Kris Susee says.

“On the weekends, you hit the malls, beach, amusement parks or just hung out with friends. Very typical was going to a buffet and enjoying a fancy resort’s pool and beach front,” Kris Susee said.

As for culture and landscape, Dubai is very different than America.

“It is like a city in the middle of the desert. It is much more industrial, there are a lot of businesses. There is lots of sand, hotels, tall buildings and islands,” Amber Susee said.

Dubai is also unique because it is a Muslim country and their native language is Arabic. While the Susees were not required to wear headcovers or speak completely in Arabic, they still learned and got to experience many aspects of the culture.

The Susee family had many takeaways from their time in Dubai but one of the most significant was the kindness of the people and the safety.

“There are so many people away from home there is a greater effort and genuine desire to get to know people. However, because of the language barriers, at times, just recognizing a familiar face and saying hello was a far as you could get. In terms of safety, I have never felt safer anyone in the world. You are in Dubai because you are an Emirate or you are working there,” Kris Susee said. “The crime rate is extremely low because the government takes care of its people and those working are trying to support family living elsewhere, such as India and Pakistan to name a few, so no one wants to risk deportation. Walking around alone, even at night, was never an issue for me or my daughter.”

One thing the family will miss the most is the weather. It was sunny majority of the year and never rained, Amber Susee says. However they were looking forward to another Washington characteristic: the Seahawks.

“Returning back to the states I was most looking forward to time with family and friends, being back in my house with a backyard (after two years in a 1200 square foot apartment on the tenth floor) and watching the Seahawks. We really did miss being part of the major sports scene. Seems silly but you realize how American some things are and others just could not relate to that,” Kris Susee said.

Their experience was once in a lifetime and they will definitely go back, Amber Susee says.

If anyone is looking for an amazing place to travel, one with unique architecture and warm and friendly people, Dubai is the place to go, Kris Susee says.