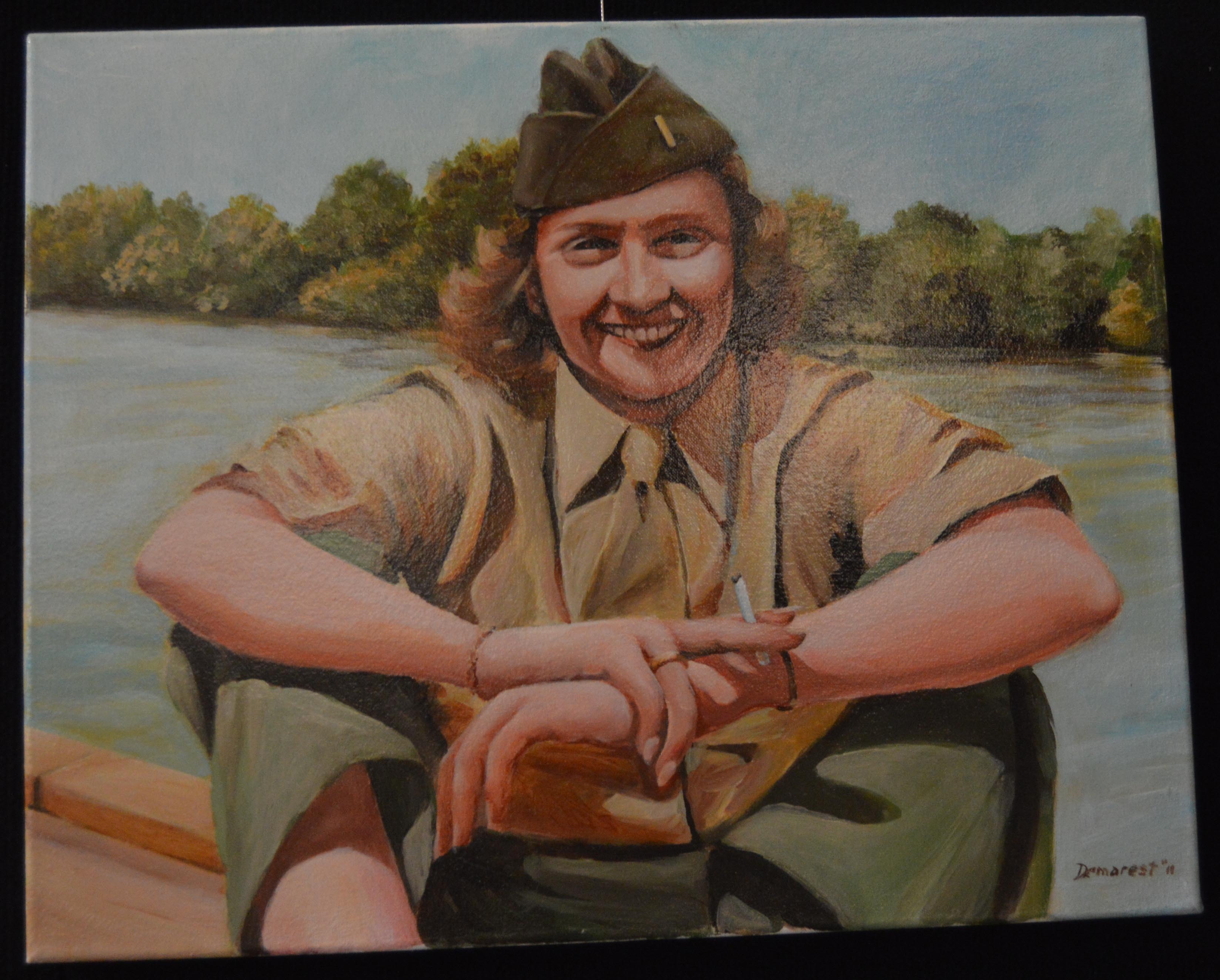 Chris Demarest is the artist in residence from Sept. 1- Nov. 30 at the Puyallup Public Library as a part of his World War II Portrait Journey to different states around the country.

Demarest’s artwork includes a multitude of portraits that he has painted of real people from the World War II era.

It is this very humanity that Demarest says he hopes to bring together through his paintings and to assist in tearing down the barriers of prejudice and racism that he believes is still prevalent in society today.

“It is not up to me to change them but it is up to me to say something. It is more hurtful to them but they do not see it that way. It is exhausting to wake up angry at the world. I do not want to go every day assuming that people are bad; I want to assume that people are good,” Demarest said.

A few publically-acclaimed World War II figures that Demarest has painted include U.S. Sen. Bob Dole, late Sen. Daniel Inouye of Hawaii, munitions worker Josephine Baker, as well as Tokyo Rose, a Japanese-American citizen who was the first American to be tried and convicted of treason.

“Tokyo Rose was born and raised in California. Her real name was Iva Toguri. Ultimately she ended up working at Radio Tokyo in Japan as a broadcaster of music. At the time she was broadcasting, there was more than 12 different Tokyo Roses. Those were the ones spewing the Japanese propaganda during the war,” Demarest said.

Demarest revealed the irony surrounding his portrait of Tokyo Rose.

“The irony of it all is that she was born on July 4. That is why I painted her in the colors red, white and blue. Most people who stop and read that story [of Tokyo Rose] do not know the real story when I ask them,””

Demarest’s artwork also includes paintings of several photographs of people from the war that were brought to him by other people he has met on his journey thus far.

As for why he has felt so compelled to painting portraits of people from World War II, Demarest revealed that it is all a matter of getting back to the human connection that is lost during war.

“There is never going to be an image glorifying war but there was as much downtime to war. Not everyone saw combat. That is what these paintings are about. They are some of the quieter moments, the funny moments and the serious moments. It does not always have to be about blood and guts,” Demarest said.

According to Demarest, this World War II Portrait Journey started nearly five years ago, in early 2011. He then flashed back to the very moment where he realized that such a journey was a necessary part of his future.

“This whole project started out when I was having dinner at a couple’s house. The husband showed me a photo of his father at 19 years old and who was flying this fighter plane against the Japanese. He is still alive,” Demarest said.

Once again, it was the humanity that was the real connection between Demarest’s artwork and his war-themed portrait destiny.

“The husband says, ‘Well, if you paint it I will buy it and wrap it up and give it to him for his 88 birthday.’ Later, he told me his father’s reaction. He said, ‘I have never seen my dad cry but he teared up when he saw that portrait.’ Stumbling upon that photograph at that couple’s house changed my life,” Demarest said.

As for the future and what happens after his World War II Portrait Journey ends, Demarest has another project in store.

“I will continue this journey for another four years and collect all the stories that I hear from other people that come up to me and hopefully publish them all in a book,” Demarest said.

In the possibility of a complete illustrated book Demarest stated that the reproduction of his artwork may prove to be quite expensive but that he does hope to include a few of his portraits within the book.

“I would just have to tell the stories and have a few samples of paintings. I am proud of my artwork but as I always say; the artworks are conduits to the stories. If I can bring you over visually to then read a story, then I have succeeded,” Demarest said.

Throughout the rest of his journey, Demarest looks forward to hearing other people’s unique stories about their own experiences in war or from stories of their loved ones who were involved in war.

“I would not be able to hear all these stories if I was working alone in a studio. People have to come in and tell me. In my own way, I am rewriting history to reflect the truth,” Demarest said.