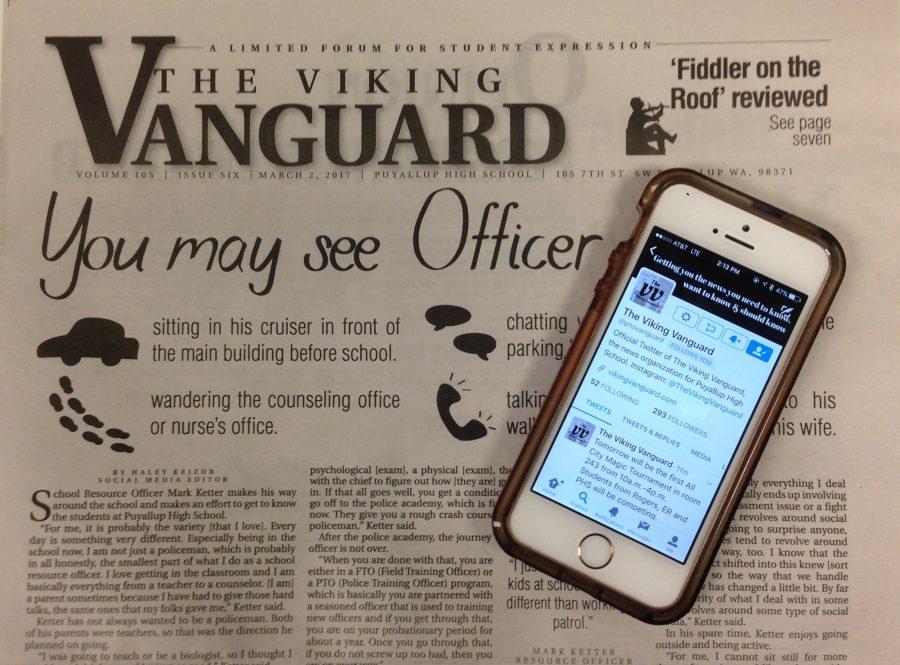 In an era where adults and teens immediately head to Twitter when a tragedy happens and go to Google when they want to search for information, one can reflect on how media has changed over the decades.

As technology has improved, newspaper distribution has declined. Millennials through baby-boomers will all turn to web or social media to consume news.

University of Washington Communications Professor Randal A. Beam was a paper carrier as a child and his earliest memory of receiving news was reading the newspaper at his parent’s house. Beam became interested in journalism when he was in high school and worked for the high school newspaper, then majored in journalism in college, worked for newspapers for about 10 years and has taught journalism for the past 25 years.

Now, Beam receives most of his news electronically. Beam subscribes to two different newspapers, The Seattle Times and The New York Times and he reads both of them on his iPhone or iPad, he says.

“There have been a lot of changes in the media over the past few years. Maybe the most obvious change is the way that newspapers, which I now called news outlets because many times they are not really on paper anymore, deliver news and information to their readers. We have gone from a situation where news was exclusively delivered in a physical product on paper to one where it is delivered electronically, mostly over the web and mobile devices,” Beam said.

Media is change is not limited to written publications. Visual news, such as broadcast, has also been subjected to change.

“For broadcast, that would be radio and television largely, almost all the news outlets… have their own websites or their own app for distributing news and information, along with sending it to us through cable or over the air,” Beam said.

University of Washington Lecturer Caley Cook has also noticed a change in media over the years. As a child, Cook looked forward to reading the local news, she says. Nowadays, Cook reads about three publications online, searches Twitter and Facebook for news and reads the print version of The Seattle Times each day.

Cook noted a change in media simply by the way that the modern generation uses the word “share” to describe the dispersal of news, whereas the parents of current teenagers would use the term “distribution.”

“We see a narrowing of the way that users can find and read news. Most people are informed by some kind of social media, usually Facebook. We know that a Facebook feed, depending on who you are friends with, can either expand your news knowledge base or narrow it. Most people are reinforcing their own beliefs and experiences through social media and news is no exception,” Cook said. “It can be very difficult for reliable and trustworthy news sources to break through the muck of a social feed. We also know that people under the age of 30 are less likely to share political news than people who are older, so the ideas about how we use social media to share news are definitely changing.”

AP U.S. History and American Studies teacher Mychal Limric has also noticed a change in media distribution. Before Limric was a teacher, he was a sports anchor on television, a news reporter and a sports and news producer.

“I think we, as a society, have become very lazy about how we get our news. We are creatures of habit and whatever is easiest is what we do. So it has changed a lot. It used to be that people would read and make decisions on their news and now we have opinions and those opinions are reinforced by what we see and we see what we want to see, usually. [When we see something] that we disagree with, we generally argue with because we can interact with the news, which could be a really powerful tool. Hopefully your generation will use it right but my generation has not so I am not convinced of that,” Limric said.

Limric claims that the reason media has changed is due to how expensive it used to be.

“Newspapers are very expensive to run and it used to be that newspapers and even television stations to some extent, were there for public service. They made some money but that was not their primary goal. Nowadays, the bottom line is the bottom line. Basically, you make money or you go out of business. You lose that as a journalistic outlet and you lose that as something people can go to. It takes away a lot of jobs and it frightens me for the future of the media and also the future of people like you that maybe want to become journalists because there are going to be fewer jobs,” Limric said. “It is a real loss, a real threat to the first amendment and a real threat to democracy. It is happening now and we do not really talk about it.”

“It used to be that you had to physically distribute news and information on paper or you had to distribute it through television signals that would generally speaking, only carry 100 miles or so from the tower from which they broadcast. Of course today, The Seattle Times can easily ship its stories around the world in seconds on the web. Then as a result of technology economics, the system that underlies the production of news information has changed. That is affecting the kind of content that people receive today as well,” Beam said.

The way different individuals perceive media change is different. For example, Limric does not think the change is good, whereas Cook does and Beam sees both sides.

“It could be good. In a perfect world we would use this technology to interact and have deep discussions on things we disagree about and come to understandings, much like you would in a good classroom but we do not treat it like a classroom,” Limric said.

Cook does support the change, however she did find it difficult to watch her friends believe fake news or untrustworthy sources as the truth on social media. Finding what readers  want so that they have economic viability in the long term will be a long, experimental road, Cook says.

“One of the ways the change has been good is that we can get news more quickly today and more easily. In some respects, at least for us as consumers, more cheaply than we could have in the past. We certainly have an opportunity to see news events unfold in somewhat different ways. The web has given news organizations and news outlets a chance to tell stories in ways that they were not able to 30 years ago,” Beam said.

Although much of the change is considered good, Beam points out some of the negative change as well.

“A couple of ways in which they are worse are the technology and the accompanying economic changes. Economic forces that underlie news organizations operations these days have made it harder for some of the bigger news outlets in the past to remain prosperous and as their economic fortunes have declined, which has meant a smaller staff. Some people would argue it has meant less robust coverage of issues that are important in cities,” Beam said.

There are many pros to the old way of news distribution, Limric says. Print publications were the original form of news and were successful for many generations. There are also many cons to print, which has led to the changes in media.

“The pros are that you have time to take in the information. It is a more thoughtful way to consume it because you sit there with it. You might stop and start, [but] you cannot click away [like when you are online]. You can put the newspaper away but you cannot just say ‘oh this is boring I am going to click.’ I think people spend more time with it. Plus, print publications tend to be longer than online publications so there is more material there. People let it go more in-depth than they would on a website,” Limric said.

While print does allow for more time for consumption, it costs more to produce, Limric says.

“A con is that it is way more expensive. Obviously it is environmentally poor because you are taking paper and having to print it; it is not as convenient. You can stuff a newspaper in your pocket, people used to. Everything else is on your phone,” Limric said.

In the same way, there are pros and cons to social media and web publications. One of the pros is how easy social media is to access, says Beam.

“[Social media] allows you to curate news and by that I mean, create an individual or personalized news product that could have any information in particular interest to you. If you wanted to, you could probably set preferences for some of the apps to give you only information, only news and information in Washington or the area that you live in. That is a nice feature of social media or web distributed media,” Beam said.

While there are many benefits to web, there are also many cons. For example, how fast people try to consume it, says Limric.

“The downside is people do not tend to take the time to look at something or someone else’s information or even neutral information and spend some time with it. They just want to react. We do not have discussions anymore, we have arguments,” Limric said. “Even the way things like Facebook are set up, they are set up for you to have opinions. It is good to have opinions but we tend to put the opinions out there, then find stuff that supports our opinions, rather than taking information and working with it and maybe modifying our opinion or having a deep discussion with someone else about it.”

Despite the changes in media, one thing has stayed the same: journalism is important, as emphasized by Beam, Limric and Cook. Even celebrities, such as Meryl Streep are making comments about protecting journalists. The current generation must carry on the journalism legacy and continue to share news, says Cook.

“We have such a wonderful opportunity to live in a representative democracy. But that government structure does not work if our citizenry is not informed. As our trustworthy news media sources have weakened, we have lost a lot of the sources that have informed people in the past. Young people are such a beacon in this because you have the opportunity to develop new information sharing methods,” Cook said. “As NYU scholar Jay Rosen likes to say, ‘the old objective model of news is dying but the new model replacing it is something like “I am here, you are not, so let me tell you about it.”’ That is a promising style of news for the next generation.”

It is hard to fathom how media will change in the next 20 years, Beam notes. Cook predicts the end of newspapers, while Limric foresees less news organizations in general.

“I see people being their own communications hub, putting out information that they want to put out, even more so than now. I see outside information coming from fewer and fewer sources. Information is spoon fed to people and I see us losing some of our ability to both interpret the news, analyze the news and debate the news. It is a real loss,” Limric said.