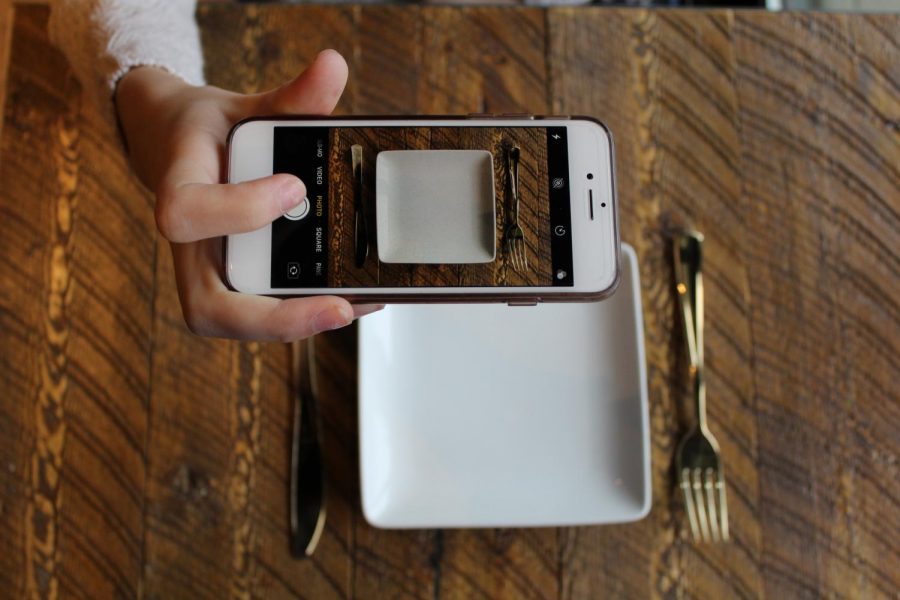 And so the process goes.

Studies show that people can get addicted to social media in a similar way they can get addicted to drugs or alcohol, as explained by Simon Sinek on Inside Quest; it triggers the release of a chemical called dopamine in the brain. Dopamine is known as the “pleasure” neurotransmitter or reward system portion of the brain.

Research done by Guido Frank of the University of Colorado, Denver demonstrates that women diagnosed with anorexia had more major responses to the procedure in the orbitofrontal cortex of the brain, which is associated with impulse, whereas overweight women, chosen to represent those with bulimia or binge eating disorders, showed less control and more neural idleness.

There is not data that shows that social media directly causes the development of eating disorders but it can be a risk factor that influences onset concerns. In the same way cold temperatures decrease one’s immunity to a cold, social media heighten one’s exposure.  Research from University of Pittsburgh School of Medicine found that young adults who use social media a lot are more likely to develop negative body images and eating disorders.

Psychological factors are not the only influence on the development of an eating disorder. They can also stem from a combination of genetic, biological, behavioral, emotional, interpersonal and social factors, says the National Eating Disorder Association [NEDA] Senior Program Associate Chelsea Kronengold, MA. Eating Disorder Hope cites that sports can also trigger eating disorders; nearly half of females in an aesthetic sport demonstrate eating disorder behaviors.

“Eating disorders are classified as a mental illness in the American Psychiatric Association’s Diagnostic and Statistical Manual of Mental Health Disorders (DSM-5). They are considered to often have a biologic basis and co-occur with other mental illness such as major depression, anxiety or obsessive compulsive disorder (OCD),” Kronengold said.

According to UW MPH Nutritional Sciences Candidate and Dietetic Intern Tracey Tran, there are many types of eating disorders, each with unique characteristics and symptoms.

One in five women will struggle with an eating disorder.”

According to the Emily Program, a nonprofit foundation that works to eliminate eating disorders, 30 million Americans, including both men and women, will suffer from an eating disorder sometime in their life.

One in five women will struggle with an eating disorder.

Ninety percent of those affected will be between 12 and 25.

Eating disorders are particularly high in young people because high school is a time when a lot of body changes happen due to hormonal changes, says Tran.

“Meanwhile, clothing stores and media typically showcase products that value a certain ideal that does not support this growth. High school students are more prone to search for ways to change their body in order to feel accepted, which may contribute to eating disorders. However, there are many other reasons eating disorders develop that do not relate to body dissatisfaction,” Tran said.

There are a handful of particular symptoms that individuals can look out for, in their friends or family members.

“Symptoms of eating disorders vary but some notable early signs and symptoms include: inadequate food intake leading to significant weight loss, intense fear of gaining weight, extreme concern with body weight and shape, regular intake of large amounts of food accompanied by a sense of loss of control, use of inappropriate compensatory behaviors, [such as] vomiting, laxatives, excessive exercise and more,” Kronengold said.

Because eating disorders arise differently for each individual, sometimes the development is not preventable, says Kronengold. Four out of ten individuals either personally experience or know someone that has an eating disorder. If you or someone you know is demonstrating signs of an eating disorder, there are a few things you can do.

“One of the most important things you can do is learn more about the complexities of eating disorders. Take the time to more fully understand these serious illnesses. While it may be scary to hear about some of the consequences, it is important to recognize the real, complex nature of this disorder,” Kronengold said. “If you are worried about someone’s eating behaviors or attitudes, you can express your concerns with honesty and respect in a loving and supportive manner. It is also important to discuss your worries early on, rather than waiting until a person shows physical and emotional signs of a full-blown eating disorder. Be sure to address your concerns in a calm, caring and non-confrontational manner.”

There are a handful of widely-believed stereotypes regarding eating disorders that are untrue or based on inaccurate statistics. PHS School Nurse Jennifer Schafer explains that eating disorders are not just a lifestyle choice, as well as debunks some other myths.

“Eating disorders are not a lifestyle choice or just a teen phase that will go away if you ignore them. You do not have to be underweight, you cannot tell someone has an eating disorder just by looking at them [and they are not solely a] result of over controlling parents. [Eating disorders do not only affect] teenage girls and recovery is not rare,” Schafer said.

Although eating disorders were once thought to affect only a narrow portion of the population in the teens and early twenties, we now know that they affect people of every age, race, gender and socioeconomic status, Kronengold adds.

Researchers for the Centers for Disease Control and Prevention did a study in 2016 using a constructed week sampling procedure, collecting data from Tweets using the hashtags #thinspo and #fitspo. Data analysts then used statistics to extrapolate the topics and characteristics associated with the Tweets and replies.

Within adolescents, rates can be as high as 16 percent for binge eating, 20 percent for purging and 61 percent for non-purging behaviors, such as fasting, skipping meals and restricting food intake. The age of onset eating disorders is typically in the late teens. For those aged 13 to 17 in the U.S., 89 percent used social media in 2015 and 33 percent used Twitter.

The results of the study showed that engaging with social media content through retweeting or liking a tweet may have some influence on behavior. The #thinspo tweets were significantly associated with retweets and likes and the content focused on unhealthy behaviors and suggested an engaged community that normalizes disordered eating behaviors and increases body dissatisfaction.

Over the past decade, there has been a 119 percent increase in hospitalized 12-year-olds admitted for eating disorders, according to the Eating Recovery Center. The PEW Research Center also reports that the percent of Americans using the Internet and at least one social media site has increased more than 50 percent since 2005.

“Media affects body image by conveying certain body ideals associated with certain connotations, such as a fit and healthy person versus an unhealthy, “lazy” person. It increases body dissatisfaction and comparison,” Tran said. “Visions of people cause body comparison. It is inevitable. While all bodies are different, people on screens tend to steer more towards society’s “ideal” body type. While these body trends change constantly, the average individual is unable to see that having different bodies is okay.”

“The NEDA reports one in every three TV commercials convey an attractiveness message, that the idea of extreme thinness is much more desirable than a normal, healthy weight. We see that through social media sites. Young people see thousands of images and they use them as personal benchmarks,” Schafer said. “Media sets up that so-called standard that for people with eating disorders, they are born from this intense desire to achieve an impossible standard. For a kid it is difficult to differentiate between their realities and what their actual body looks like and what their perceived reality of what celebrities and stars look like.”

Aside from television, magazines and other outlets impact the establishment of mental illnesses, including eating-related disorders.

“The media is a powerful tool which has the potential to positively or negatively influence one’s body image. The media often perpetuates dieting and a drive for thinness in women and young girls. Research indicates that of American elementary school girls who read magazines, 69 percent say that the pictures influence their concept of the ideal body shape and 47 percent say the pictures make them want to lose weight,” Kronengold said. “While there is no single cause of body dissatisfaction or disordered eating, numerous studies have found exposure to the thin-ideal in mass media to be correlated with body dissatisfaction.”

Particularly, social media plays a major role, especially as adolescents have access to online sites at a younger age.

“Social media is especially impactful because it is meant to be a space for “normal” people to share “real” life experiences. However, this is a deception because users typically only post their highlight reels and have the power to edit their images. There has been an increasing trend on social media to post health-related content and advice, even when not research-based,” Tran said. “This content may be incredibly triggering for individuals who are more prone to compare their lifestyles, health status and/or bodies with others on social media. Orthorexia, or an extreme obsession with healthy eating, is most commonly associated with such content.”

While the widespread movement for #thinspiration on social media posts focused on thinness and encouraged disordered eating behaviors, social media does have some benefits for linking sufferers and offering hope.

“The body positive movement is making great strides to promote size diversity, body acceptance and a healthier body image for women and men. Body positive activism promotes and normalizes the notion that all bodies are good bodies; it is important for the media to continue to embrace and encourage diversity,” Kronengold said.

Eating disorders have the highest mortality rating of any mental illness. Anorexia is the third most chronic illness among young people. Three percent of youth are affected by an eating disorder. Look around the classroom, look at your classmates; at least 20 of them are likely demonstrating behaviors of eating disorders.

Every 62 minutes, someone passes away from an eating disorder.”

Every 62 minutes, someone passes away from an eating disorder.

Every 62 minutes, someone loses their life to a disorder that likely could have been treated.

Every school day sees the death of seven victims of eating disorders. By continuing to stay educated, aware and critical of the media, students can eliminate the chance that one of those seven come from Puyallup High School.