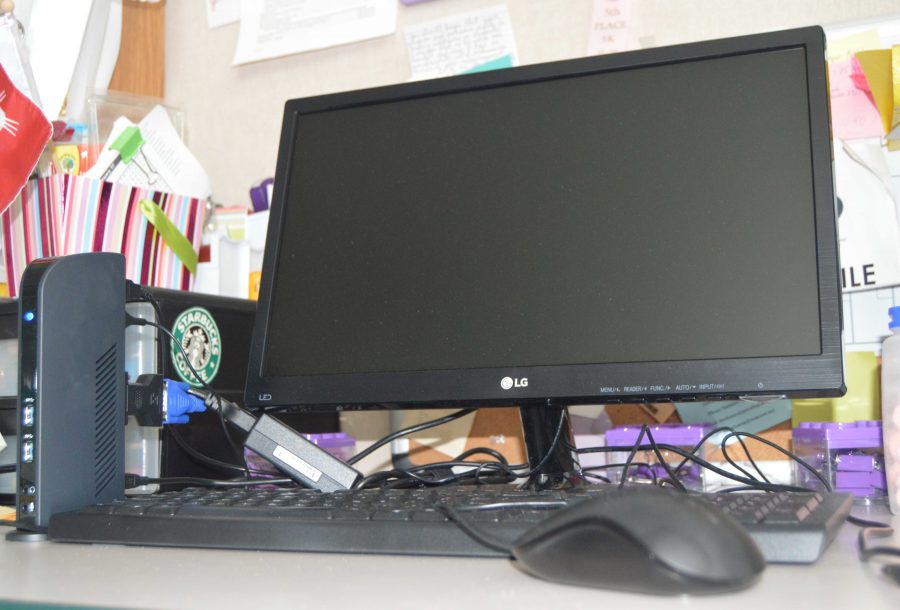 A teacher greets students as they file into the classroom, laptops under their arms. They take their seats, some in the front, some in the back.  The teacher uses her tablet to pull up a PowerPoint on the flat screen mounted to the wall.

While students answer the problems on the board, the teacher can sit at her desk and take attendance or respond to emails, using her desktop computer. If students are confused, they can easily Google how to do a problem and as soon as they finish, they can get their results to see how well they did.

As the class period rolls on, the teacher can roam around the class, changing the slides of their PowerPoint with a tap on the tablet, not having to worry about tangled wires or blocking the projector’s light. Students from all seats can see the crisp, clear image on the screen and hear the instructions the teacher is giving.

With the new technology that the Puyallup School District is implementing into their schools, this scenario can become reality.

Executive Director of Digital Education Platforms, Mark Knight, emphasizes how much change is being made to technology in the coming years.

“We have spent the year doing some research and also doing some professional development with teachers to be ready to roll out some new devices for the new school year and actually some of the devices will be coming in fairly soon for use now. Basically, they are tablets that will help them to connect wirelessly to devices so teachers will have the ability to roam around the classroom and help kids when necessary,” Knight said.

Rather than start by buying every grade laptops, the district has decided to start with the class of 2023.

“Starting with our next year’s seventh graders, they will be receiving laptops. We started with the seventh grade because we needed a place to start so that we could eventually get to grades 4-12. We had to do it responsibly with our budget and we also had to do it responsibly with our time. We could have gone and purchased 12,000 computers but we are starting small so we can do it right,” Knight said. “[The students are] going to be receiving Lenovo Yoga ThinkPads and the purpose of that is they [will] have the ability to do a lot of their course work, combine with schoology, use digital ink so they can write on the screen, do math and a lot of other things.”

Additionally, secondary teachers will be receiving flat panel displays, basically LCD TVs, get enhanced sound systems and have the ability to connect wirelessly from their device to the screen, Knight explains. They hope to equip elementary classes with interactive TVs and anticipate technology to change overtime.

Executive Director of Instructional Technology Mark Vetter explains how the new systems will be beneficial for students’ learning.

Vetter describes a scenario in which the new technology will play a role. The new devices will benefit not only the students but the teachers, too.

“If I am a math teacher and I am able to watch the students as they are practicing instead of being up front with my technology, then I can modify my instruction to meet students’ needs easier. As we implement schoology, as students get their one to one device, [we will stay with math], there is actually some automatic grading functions in schoology,” Vetter said. “Let us say at the end of the math lesson, the teacher wants to do a quick assessment to find out how the students did on the learning of the day, they can give the students an assessment within schoology and it will actually autograde and give immediate feedback to the students.”

This summer, the Information Technology Center (ITC) will be touching 7,000 pieces of equipment. Within two years, they will double the amount of computers in the district and triple the amount in four years.

The ITC also upgraded PHS’ Wi-Fi about a year and a half ago, which, along with the new devices, will allow the classrooms to become more wireless and mobile.

“We do not teach technology, we use technology to learn better,” Vetter said.

Social studies teacher Frederick Orton was chosen to pilot the new flat screens this year. He describes why the district wanted to upgrade the technology.

“I think it is trying to keep up with industry. Everybody else has the latest, greatest equipment and it is more efficient use of our time. A good example is this new thing [the desktop screens]. I can be using one of my pieces of equipment, like my laptop and do my powerpoint, and at the same time, I can use this screen and enter grades or do attendance… it is a more efficient use of my time,” Orton said.

Orton complained about his past devices because he was tired of connecting and reconnecting his laptop and pulling the movie screen up and down, he says.

“What I used to have is a projector on that cart and I would have to hook up my laptop to the projector and it would shine my powerpoint presentations onto the movie screen. I would use [my laptop] at my desk and then I would have to hook up to do my powerpoints and then unhook to bring it over here. Then the cart was in the way, so for a couple years I was complaining about that. Then all of a sudden I was asked to try the TV,” Orton said. “The truth is, it is kind of a joke because I am not much of a techy at all. I kind of thought that they wanted to give it to old Mr. Orton because if I could learn to use the flat screen TV, then anyone could.”

One major aspect of implementing this many new devices is the cost. In this case, the overall cost is much less than you would expect, Vetter said.

“Costs are coming down dramatically. The LCD panels that we are putting on the wall actually cost more to mount them than buy them. A panel is cheaper than a projector by far because technology has changed. The cost for computers, the tablets our teachers are holding is an incredible buy for the power of that computer. Our student computers, because we are buying so many, the cost of technology is dropping, which is one of the reasons we can do this. The other piece is, digital curriculum is cheaper than buying textbooks,” Vetter said.

Apart from these major savings, there are smaller savings that will add up over the years.

“There are lots of little things. You know your student handbook that you sign for every year? We still have to have them this year at the junior highs but next year when the kids log in their very first time, it is going to say ‘I accept the rights and responsibilities’, it [will be] a little checkbox and then it is a link to the rights and responsibilities. We no longer have to print planners for the junior highs and later at the high schools. That is one example of a little savings. There are a lot of saving that we are going to realize from this,” Vetter said.

Based upon the pilots, the kids and the teachers are loving it. Everybody is a little nervous when it comes to change but once they actually get to play with it and see that it works, people will be very excited, Vetter says. Since Orton tested out a pilot this year, he can give a valid claim regarding how people are liking it.

“I like it and of course [the technology people] wanted to know my opinion but also my students’ feedback. One of the questions was ‘could they see it okay in the room’ and then ‘could they hear ok?’ One of the complaints about flatscreens is they do not have very good sound systems, that is why at home, a lot of people will buy [an additional speaker],” Orton said. “Actually, that sound system has been really good because I am not using the sound from the TV, I am using the old amplifier that came with the original cart, so when I show movies, it is almost like being in a theater because the sound is so strong and so good. Also, my powerpoints are really vivid because it is high definition.”

Overall, Vetter emphasizes that although they are implementing new devices and encouraging more technology, students and teachers should not forget human to human interaction.

“This is going to be a lot of fun, it is going to change the way that we do business in the district in so many ways. Hopefully down the road, we can eliminate a lot of paper. It is just a fun project to be working on,” Knight said.