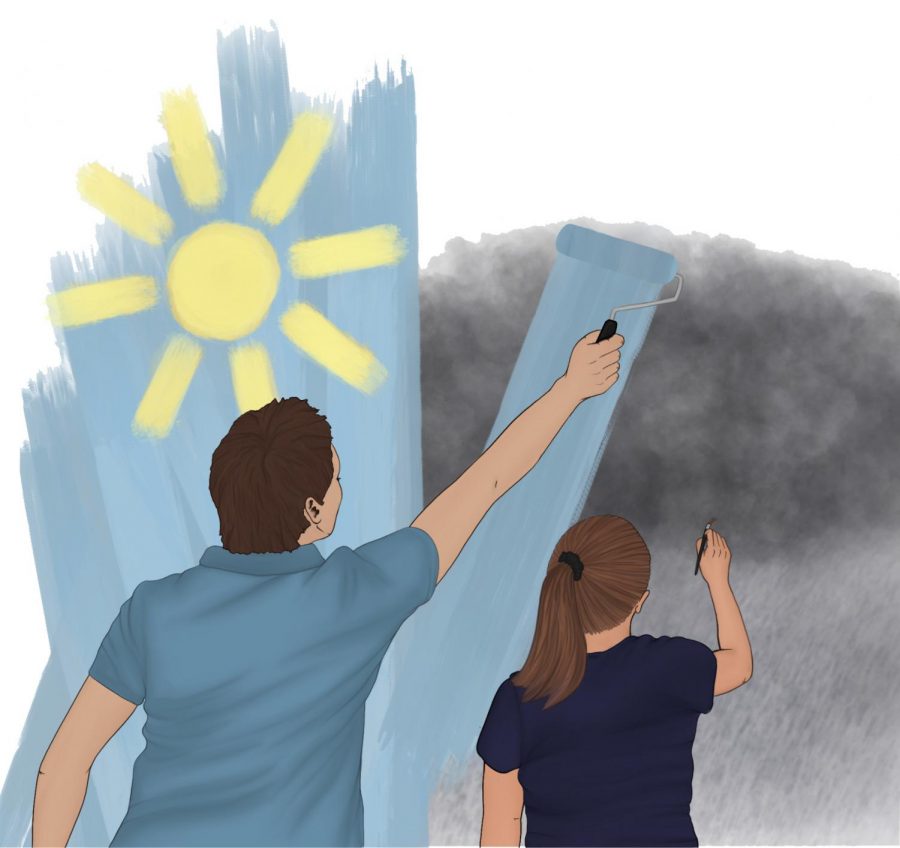 The music you listen on the way to school, the graphic on your shirt, the photographs on the wall.

It surrounds us and shapes our culture. But what would happen if it was taken away? Should all forms of art be accepted or do some go too far?

This a topic of recent discussion here at Puyallup High School.

Seniors Kayla Saxton and Elizabeth Bones-Moore painted an image on a teacher’s window. However, this image, described by Saxton as a “creature that looked a little bit creepy,” was removed before it was even finished.

According to Vice Principal Nathan Webb, the painting was asked to be taken down because of the potential message and reaction the painting could draw.

Saxton explained the intent and meaning behind the painting.

“The painting was supposed to be a portrayal of teachers and how people can perceive them in different lights. So it was holding a heart of gold, based on that you could perceive it as taking someone’s heart or giving your heart. It’s kind of related to how students and staff view each other,” Saxton said. “You don’t really know each other that well and so you kind of assume things, where we actually had to know what the entirety of it is. That’s how we made the creature that looked a little bit creepy, but it wasn’t supposed to be anything satanic. It’s supposed to represent how there’s a misinterpretation between people and how people perceive each other.”

Webb said that after a conversation with the two students about the painting and trying to collaborate, the administration asked them to consider how the painting could be seen, despite its intent.

“Representing a staff member as a ‘creature’ that some, not the two artists, but some stakeholders and students might view as demonic or satanic image, probably is not how we want to represent our teachers. That’s not something we want to do. The students felt the heart that it [the creature] was holding represented that [the teacher] cares about students if I remember correctly. But other people might look at that as maybe [the teacher] ripping the hearts out of somebody else,” Webb said.

According to Principal Dave Sunich, because of the negative implications of the painting, administration believed it would be best for the painting to be removed.

Bones-Moore says she does not fully agree with the administration’s decision because to her, she hoped the painting would stir up a conversation.

“I think our school should have diversity in it. When you walk through the halls, all you see are positive quotes and everything. It’s sunshine and rainbows. I don’t think that’s giving us a real-world experience. I think having diversity and having something that makes someone uncomfortable and causes conversation is something that we need in our school,” Bones-Moore said.

The free expression of student opinion is an important part of education in a democratic society. The district encourages students’ verbal and written expression of opinion on school premises so long as it does not substantially disrupt the operation of the school or otherwise violate this policy. Students are expressly prohibited from the use of vulgar and/or offensive terms in classroom or assembly settings.”

According to Saxton and Bones-Moore, they believe students should be able to express themselves, but acknowledge that there are some limitations.

According to James Headley, professor and chair of the Eastern Washington University department of political science, students’ ability to freely express their opinions is paramount to their rights.

“Art is powerful and students should have space to express a wide range of opinions — good, bad and everything in between. Inside an art class sounds like a fine place to allow a wide range of express,” Headley said.

So where is the line between art and appropriateness at school?

“As the Tinker v. Des Moines case said, students and teachers do not leave their First Amendment rights at the schoolhouse gate. Now the further law on that is administrators can take some action if the expression interferes with teaching or interferes with the operations of the school,” Watts said.

Webb echoed Watts’ explanation of how expression can be limited in schools.

“Freedom of expression is a pretty massive thing. Ultimately the standpoint of the school is that the images that are around our school should support the message, vision and goals of the school and district. Everyone’s going to interpret things different, everyone has a different threshold of what is appropriate and what is not,” Webb said.

According to the Puyallup School District Board Policies regarding student expression (Policy 3220), “The free expression of student opinion is an important part of education in a democratic society. The district encourages students’ verbal and written expression of opinion on school premises so long as it does not substantially disrupt the operation of the school or otherwise violate this policy. Students are expressly prohibited from the use of vulgar and/or offensive terms in classroom or assembly settings.”

The policy also addresses where expression can be distributed. The policy states that “students and district staff may distribute student publications or other or other materials on school premises in accordance with procedures developed by the superintendent. Such procedures may impose limits on the time, place and manner of distribution including proper authorization for the posting of such material on school property.”

Administration knows the community is involved in the school and may walk by the painting and this was a key aspect of its removal. However, according to Cynthia Mitchell, Associate Professor of Journalism at Central Washington University, students shouldn’t have to worry about that.

“Students are under no obligation to promote the school. Art is art, and often it speaks to serious issues,” Mitchell said.

Mitchell also discussed that situations must meet a standard before it can have grounds for removal.

“The standard is that they must be able to show it is likely to cause a ‘material and substantial disruption’ to the educational environment,” Mitchell said.

Headley also understands that although First Amendment rights of students should be protected at school, administrators also are in a tough place.

“Schools are in a difficult position at times and stand in the place of parents and have a responsibility for the health, safety and welfare of all students. First Amendment rights are not absolute for anyone,” Headley said.

Watt commented on why she believes differing opinions should have a place in a school setting because she thinks it is an opportunity for discussion.

“I think commentary and discussion are important to the learning process. That kind of thing should not only be happening but encouraged at school,” Watts said.

Watt also realized that although the painting is being debated, it is a learning opportunity for both students and administrators.

“At the very least this is a teachable moment for discussion about art and expression and the First Amendment. It really seems like an opportunity to have some discussion with the administration,” Watt said.